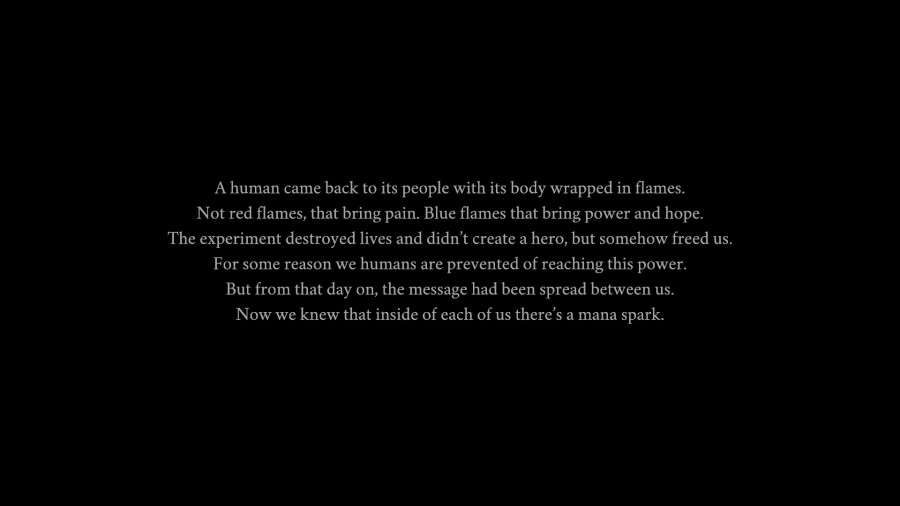 The world is filled with magic. All of the inhabitants of this world are imbued with the ability to control and use magic. The only creatures on this plane that cannot control magic are humans. This inability to control magic makes them more vulnerable to the other creatures, which results in humans being killed or enslaved and it is up to you to stop the murder and enslavement of countless people.

Mana Spark is a game developed by BEHEMUTT and Kishimoto Studios and released September 2018. The core of the game is a action, RPG, rouge-like and I love some rouge-likes (and lite’s). The game play revolves around the same old “figure out enemy movement patterns” then cut their asses down. There are only a handful of enemies, ranging from wolves, bats and orcs to necromancers and skeleton warriors. It does take some time to hone your timing against the handful of enemies because DAMN do they hit hard. walking into the beginning level, your character usually starts with two or three hearts and before you know it, your breathless on the ground. An interesting addition was the idea that the enemy “works together” when engaging you, which, in theory, adds a higher difficulty curve to the game. Throughout my entire time with the game, I could not discern the difference between “working together” and difficulty in overwhelming numbers. A majority of the time enemies would just sprint towards me in a frantic attempt to skewer or puncture me with their swords. There are times that the enemies do work together but most of the time that idea never really comes to fruition.

Mana Spark has three different classes to choose from: The Hunter, whose attack speed is slow but deals the most damage. The Guard, whose crossbow shoots fast but does not deal as much damage. Lastly, the Warrior, who plays the defense game with his sword and shield. All of the playable characters are different from each ensuring that every play through will be vastly different from the previous. Add that to the procedural dungeons and you get a game that is almost always different from the last.

There are four main dungeons with two or three sub-dungeons before facing the mini-boss. Within dungeons are static-items and use-items that can be picked up or bought that aid you in battle: Health up, damage up, attack speed up, when hit you drop gold, petrify or poison enemies, slower enemy projectiles, etc. There is a lot of redundancy between items and a run can essentially be ruined if an item does not boost attack speed, damage or health.

Use-items are vital in completing the game. They add so much power to the already powerful arsenal that the player has. Arrow turret, ice and spike bomb, health tinctures and bear traps can turn a fight into the players favor almost instantly if used correctly.

Mana Spark also has base upgrades to aid you in your defeat of those who are out to destroy you. You can spend Runes (found in the dungeons) in various ways: There is a cook that offers up meals that raise your attack, attack speed and health. A blacksmith who can upgrade the characters plethora of use-items and a zoologist of sorts that research the weaknesses of all of the enemies so that they die quicker.

In the end, Mana Spark is a cheap, fun action, adventure, rouge-like. The characters and use-items are all really fun to explore and upgrade, the pixel graphics are nice and set the mood pretty well once you delve farther into the dungeons. The base building does not add a lot of depth to the game but enough to make you want to do it so that you can complete the game. The end of the game adds more to the plot and adds a new difficulty setting that I sure as hell could not complete. I played roughly ten, rage filled hours of the game and each time that I completed the game, I was imbued with a sense of accomplishment because I slogged through dungeons that were designed to not let me leave alive. Mana Spark is definitely a game that I would recommend for anyone who enjoys a good, difficult rouge-like.