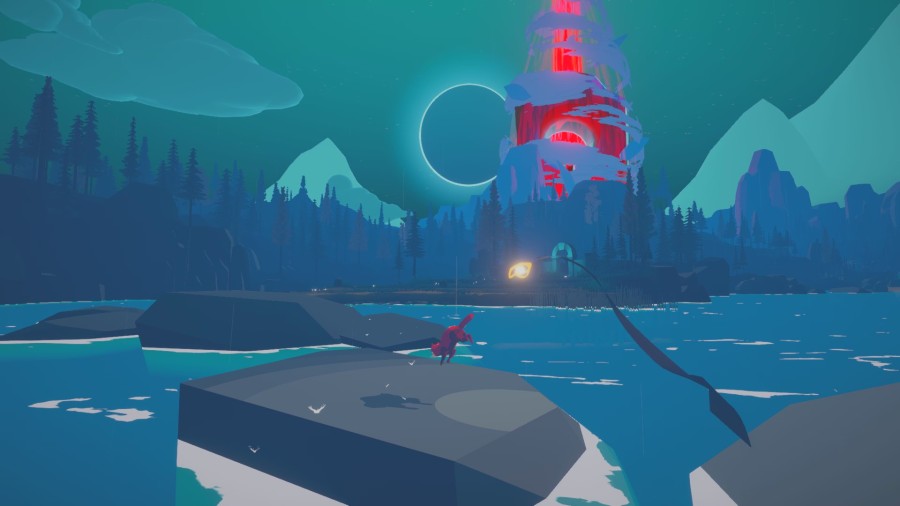 This week I played two demos but got through the first and realized that it was “early alpha” and also that game was TRASH so I scrapped it and decided on this week’s game. I saw on the demo section that I could play as a red panda so obviously, I downloaded it.

Nura’s wish is a puzzle/adventure game from Young Wolf Games. It has a planned release date of 2023.

All I know is that you take control of a red panda that currently has the last light on the planet and it is up to you to restore light to the world. Here is a quick rundown of the game from the developer:

“Nura’s Wish is an atmospheric puzzle adventure in which you carry the last light on the earth. Solve brilliant puzzles by illuminating ancient altars. Explore a mysterious world filled with riddles and secrets. Run and jump freely through diverse and open environments.“

The game looks eerily like The Pathless (only in look nothing more). Very minimal detail in the environment but it is very nice looking with rivers flowing, and lush forests, it gives off such a relaxing vibe even though it seems as though the world has ended.

The puzzles take the forefront of the demo as you go through at least four of them during your time. The puzzles are relaxing to fiddle with and, at least in the demo, act as a way to introducing you to how everything works in the world. Light is the key to solving the puzzles, so the player can drop and carry items, mainly the light, to solve the puzzles.

So far nothing has been incredibly difficult, but the last puzzle does make you think outside of the box to complete it.

Yeah, really fun demo. It had enough platforming and puzzles to really get a feel for what the release will be like. Very relaxing so far and it feels like a game that I can just hang out on my couch and play.