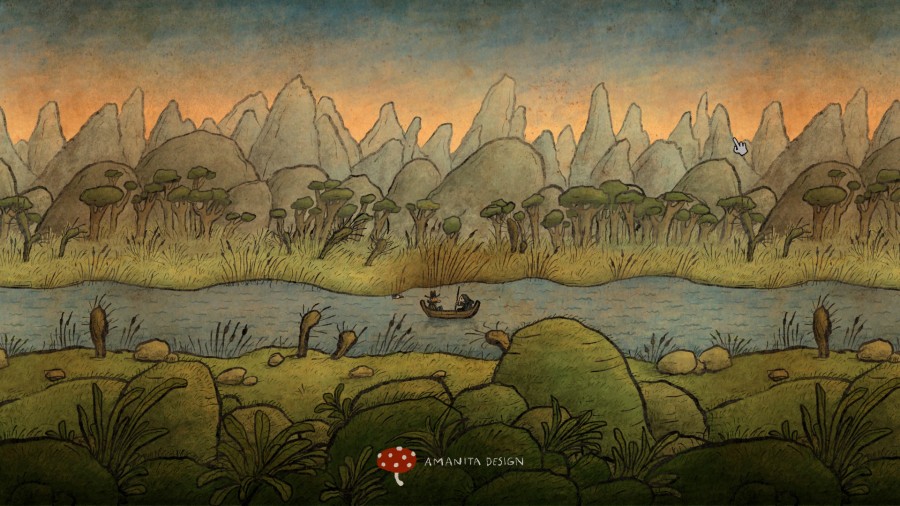 I bought Pilgrims on the fly when I saw that it was $5 and I have to say that it is one of the most beautiful games I have played this year. With its casual approach plus it’s beautiful design, I cannot really find much wrong with the it other than the experience ends fairly quickly.

Pilgrims was developed and published by Amanita Design. The team best known for Machinarium and Samorost. The game can be labeled as a casual adventure game. The game released October 7th, 2019 with a $5 price tag.

Pilgrims starts out with a scene with group of people playing a very rowdy game of poker with the protagonist not being able to bet.This begins your adventure as you exit your campsite in search for a beautiful bird to give to the ferry person so that they will give you a way down the river. It becomes known later on that every person has their own priorities, so it up to you to help them, with their woes. The search for the bird ushers the mustached man all across the land to provide assistance to an array of people, including, a homeless woman, the Devil and even the King of the country.

The world is filled colorful characters that speak Czech (I think) and they jump for joy when pleased and grumble when they are annoyed. The characters are all so adorable. I will always remember slapping a woman with a broom and while her eyes became engulfed in flames, the only solution was to dump water on her. I thought she had died but in fact she had not, got up and the homeless woman reclaimed her home and she left my party.

The game is visually stunning. Everything is hand-drawn and it is an absolute treat to look at. Damn, it’s good.

Game play is just a chain of fetch quests. You can pick up items and people in the form of cards and use those cards when interacting with other characters. For example, the rowdy alcoholic will only join your team if you find him booze BUT! the booze is only obtainable when you give the bar owner fish soup. The seamlessly endless amount of fetching is not necessarily an annoyance because all of the characters are quirky, fun and at times, cute. The game relies solely on choosing cards to fulfill the requirements of the people you meet. When grabbing an item or a person they become a card that you can select each time you enter a new section.

Experimenting is key to the game. I made all the sensible decisions while playing through the first time but then as the game ended it showed me the plethora of cards (achievements) and they depicted other ways of interacting with the people and the world. It does not feel like a chore replaying the game to experiment because the world is so vibrant and plain fun to be a part of.

The only gripe that I have is that the game is short, like really short. I beat the game in about 45 minutes in my first play through.

Just like the games that Amanita Design published before, Pilgrims is a great addition to their repertoire. Everything about Pilgrims is made with love and it shows. The design is easily accessible and it requires almost zero learning curve. It is just plain freaking adorable and fun. I put in almost three-hours into the game and I cannot recommend it enough. If you are a fan Machinarium and Samorost, you will most certainly love this game.