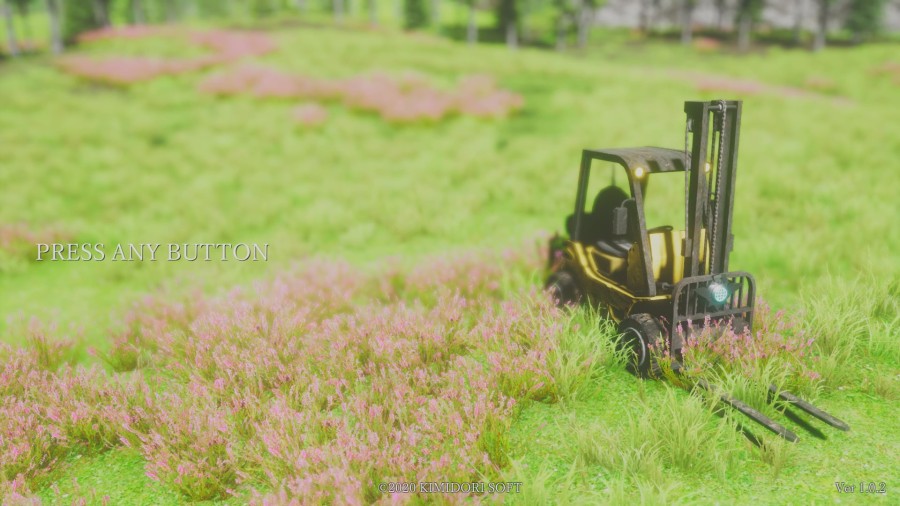 Somtimes I honestly like to fuck around and play cheapy games to pass the time. I also have games gifted to me to play and most of the time they are BIG POOP, like this weeks game. I have been playing a lot of Horizon and I lost track of my window to play a game. That being said, I thought by the look of this game it was going to be something of a gem but alas I quit it with 5 missions to go. YEAH, I SAID IT, fuck games sometimes. My blood pressure is way more important than trying to complete a game.

Humans are gone and its up to an AI controleld forklift to save the day, this week I talk about Forklift Load.

Forklift Load is a forklift simulator/puzzle game? developed and published by Kimidori Soft. Game is only on PC and it retails for $3.

You were created by humans, but now all the humans are gone and it is up to the job of the first AI forklift ever created to find out why. You travel a small world with vehicle npcs, who talk and have dialouge boxes, and do tasks for them (more along the lines of fetching fuel for them) and then you somehow end up at the final mission. There is real no story progression unless you go out of your way to find the developer logs scattered throughout the city.

I don’t have a forklift cert. so I have no idea how to drive a forklift, and apaprently from this game I ACTUALLY have no idea how physics and forklifts work. The only thing I understand is that to maintain the load youa re carrying, you need to always have your lift down far enough to get by the obstacles, because if not, the sway will take your load right off and then you’ll fail the mission.

It claims to be a streamer/content creator game.

Most of the puzzles are pretty good. There is one mission where you have to climb a construction site with almost zero room for error. THEN, at the top you had to grab some fuel and cross a narrow ass bridge. Another was grabbing fuel and then having to back up on those narrow steel beams. It takes skill? or luck, I don’t know, I just know that I did it and it made me feel great about my forklift driving skills.

Game looks good? I think, at least the area before the city looks nice. Theres A LOT of bloom, motion blur and other shit.

The city section, which is the main section, looks like trash.

The music is good, it’s got that “I want to relax and play video games” vibe. Now that DMCA has been a thing on Twitch for some time now, I am pretty positive you cannot play this game on stream any longer.

Well, all that I have to actually say is that I am glad that I got to play this game, soley, because it felt good quitting a game. I quit Forklift Load and I would again, Its a cheap, piece of shite game that relied too much on being that cool “streamer game.” I enjoyed the concept, but the execution and literally everything else was a complete and utter waste of my time.