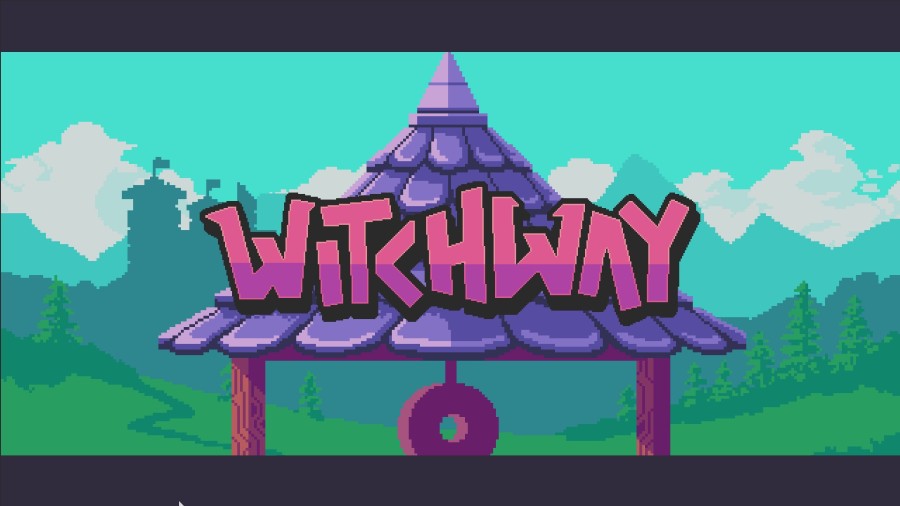 It is a shame how I come up with games to play and talk about. I really just search my Steam library for games that I kind of want to talk about about and if nothing comes up then it is over to Itch.io to browse that massive store, and something usually comes up. This week I picked up a game that largely is a puzzle game with a tiny bit of platforming involved, this week I played Witchway.

Witchway is a puzzle platformer (I think?), developed and published by Andrew Gleeson and three other people (Henri Rochefort, Niilo Takalainen and Nathan Antony). The game is on Itch.io and retails for $4.00.

Really nothing to note here in terms of a story. You are in fact a witch who has lost her wand, is stuck in a well, loves bunnies and wants out.

Probably the most labyrinth style well I have ever seen, literally a mess.

After you find your wand, the game really starts to define itself as a puzzle platformer. Witchway eases you into the puzzles, making them simple at first and then as you are exploring this endless well, the puzzles begin to ramp in difficulty that does not ever cross total frustration.

This wand can control blocks and maneuver them to how she sees fit. A majority of the puzzles incorporate this mechanic someway or another and others allow the player to make use of the environment around or the witch herself to solve the puzzle.

While you are puzzling your way to the top of this god forsaken well, there are a bunch of collectibles to find, one of which are adorable looking rabbits. They just jump right into your hat, that’s it. There are also some purple eyes to collect that are actually well hidden placed throughout the game.

This witch can survive just about anything, and if she cannot, then she just restarts from the beginning of the area. If you get stuck on a puzzle and need to return to the beginning, then a restart is just a button press away.

Music is, I think, one song but it is a catchy one and I enjoyed hearing it for almost two hours.

Witchway is a good game. It excels at what it wants to and doesn’t do much else. It is a pretty straight forward game. I like the way that it looks and the price tag. If you have a few hours to waste and want to play something fun and cute looking then Witchway is for you.

I have a complaint somewhere, but it’s not worth it.