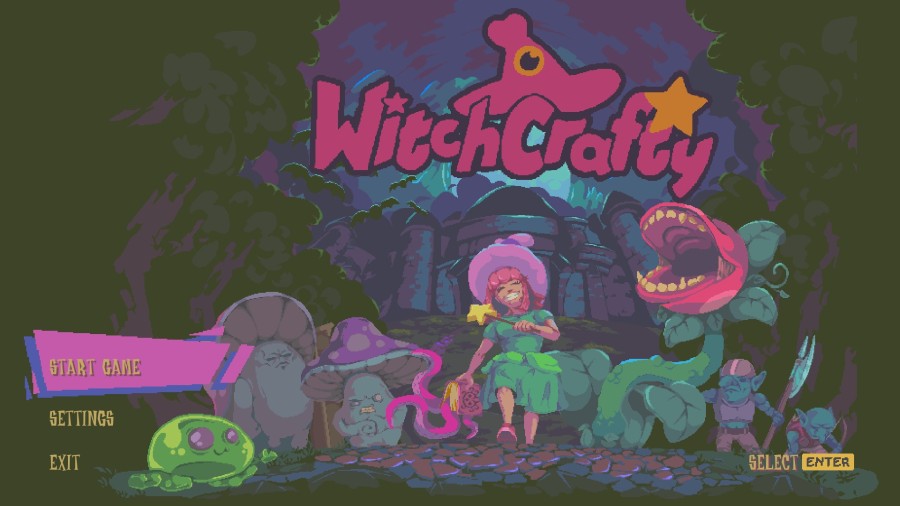 I’ve been busy this week and I barely got around to playing games but I DID play one. Apparently, it was one of the last PS Vita games and it is now coming to Steam. This week I played the Witchcrafty demo.

As the witch slept off a mean hangover, something happened to the forest. Satyrs are dead and corruption has taken over and it is up to you to find out and clean up. A developer description of the game is below.

“Something strange is happening in the Kingdom – the forests are filled with predatory plants, their peace-loving peoples have taken up arms against each other, and goblins were noticed in the deep mines. The little witch has to start her journey in search of truth and answers. Who is behind all these events? Should you trust strangers along the way? Who stole the Witch’s mail? Or maybe all this is not at all what it seems?”

Gameplay is a pretty basic platformer. The witch has the obligatory single and double jump, she can attack and dodge. She can attack with her wand and, eventually, can shoot fireballs for more damage.

Movement overall is quick and fun. There are moments when the game stops working and the player stops moving, which happened to me on more than one occasion.

Enemy types are varied and offer a challenge only because starting health for the witch is two hearts. Goblins with melee weapons and spells paired with plant life that have ranged attacks are ever-present and ALWAYS a threat.

The music is pretty good. I appreciate music that compliments the game. For instance, the music picks up when there is urgency, dark sounds when there is danger nearby and it takes a lighter tone when the dangers subside.

Witchcrafty, when it came out for the Vita, contained a lot of bugs and, on occasion, stopped working. NOW, there were some movement bugs that I encountered and the game did in fact stop working a few times.

At the end of the day, I really hope that I played a ported demo of the PS Vita version and not a newer version because it was pretty wonky. I really like the majority of the Witchcrafty demo even though there were glaring issues.