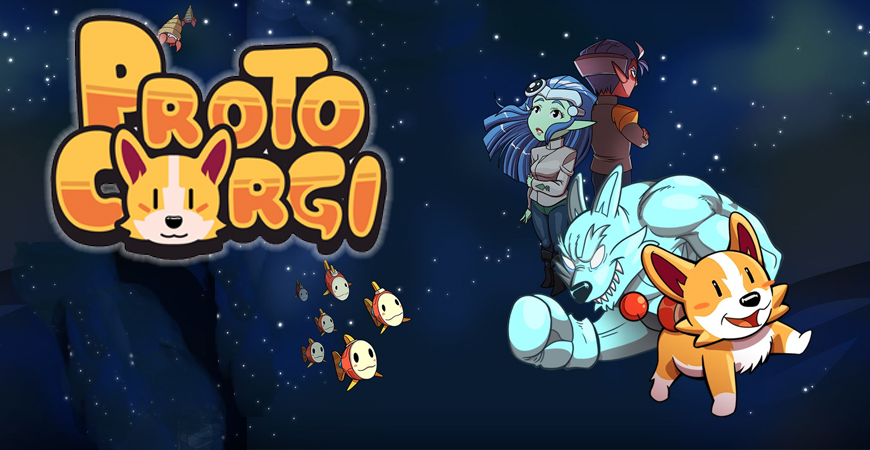 Let’s cut to the chase, This last week I did nothing but played The Last of Us remaster/remake, whatever. I did play a few demos and this week is Protocorgi.

Protocorgi is a horizontal shoot-em-up from Kemono Games and will be published by Ravenscourt. The game will release sometime in 2022 under Steam and Itch.io for some amount of money.

All that I figured out is that I am a cybernetic corgi going on a rampage to save my owner, who was kidnapped. For more clarification about what the game is about, here is a developer note fromKemono Games:

“Get ready to Bark’em Up! Play as Bullet, a C³ class (Cute Cybernetic Corgi) pup on his quest to save his owner, a brilliant scientist kidnapped by an alien race that wants to rule the galaxy. “

Protocorgi plays like all of those side-scrolling bullet hell shooters that I remember playing either on arcade cabinets at bowling alleys or on my back porch on the SNES. Gradius comes to mind, actually. Sections in the demo usually move from right to left, and one section moves vertically. I played with a Steam controller, which is trash but, anyway, use the stick to move the doggo and shoot with X, and that is pretty much the game. Just dodge, shoot the bad guys, collect power-ups to become OMEGA POWERFUL, and win the video game.

First of all, let us appreciate that the first bullets that shoot from Corgi’s mouth are BARK. From then on, abilities range from alien-seeking missiles, tri-shot, a laser, and some bombs. There is an indicator of what level the weapons are at the bottom of the screen for reference. Alien bad guy’s life force is represented with a health bar at the top of the screen. The doggo, respectively, has the typical three lives and then a continue appears, but thank God the game is not very difficult or long enough to experience that Game Over screen. Points are racked up for what looks like to be a global high score that will be implemented when the game releases.

The soundtrack also reminds me a lot of Gradius’ soundtrack. The electric sound mixes suspense and a feeling of complete off-the-wall action really well.

Protocorgi’s one level was a fun glimpse into a potentially fun video game. The game is more fun with a controller, which is a shame that the game won’t be released (for now) for the Switch. The demo is only one level but it does give you a glimpse of something really fun. So far, Protocorgi is a simple game that emulates some of the most fun games that I remember playing as a kid, which probably means that I will be buying this game when it releases.